A plan for un-crashing CrashPlan

CrashPlan is by far my favorite tool for backing up my computers. I'm never able or willing to plug my laptop in to my backup harddrive for long enough for Time Machine to do its job, all of attempts to make Time Machine work over the network (proxied through my always-on desktop) failed. I'm not rich enough to go around buying Apple's Time Capsules or Airport Extremes (I save my money to buy all of Apple's other hardware). CrashPlan, on the other hand, has been a great solution because it actually does a good job of backing up over the internet and I can backup between machines that I own at different sites for free. However, I've been having problems getting the CrashPlan UI App working for a while.

CrashPlan's documentation was largely unhelpful for diagnosing my problem, so here's some things that I learned and what to look for if you're experiencing similar problems. 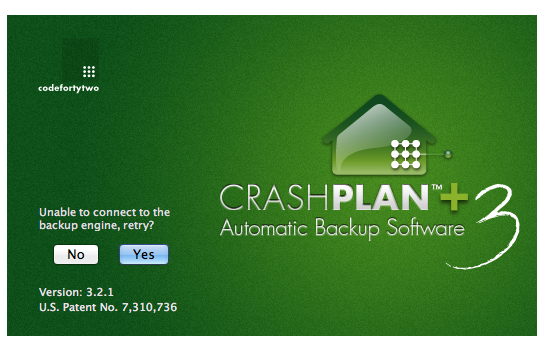 I have been seeing this from OSX Yosemite, but I did have a problem with this a while back on Mavericks, too, so this may be useful for both. For a while it was intermittent, solved by rebooting, but then it became a problem all the time.

CrashPlan's troubleshooting page for this error had me try a bunch of things, to no avail. Partly, I think it is because of outdated commands for OSX.

First of all, restarting the service using launchctl didn't make any difference.

Second, it wasn't an out-of-memory crashing problem, because the service was still running. To check, I did something like the following (from the Terminal):

You can clearly see the CrashPlanService, run by root, chugging along.

Third, I tried checking the ports for conflicts. Spoiler: turns out this was actually the problem, but their troubleshooting tips weren't helpful, because it turns out the ports were wrong, and the commands were wrong.

They have you check which apps are using which ports with the command:

Which for me returned nil. I had to widen my search:

Here, I noticed that the CrashPlan service seemed to be trying to use 4200, not 4234 or 4242, which is why my other searches turned up nothing.

I don't know how it happened that CrashPlan was using the wrong ports, but I was able to track down the offending settings that control the ports.

The port the CrashPlan app uses can be controlled by the servicePort setting, but by default it is just set to 4243 (notice here it's commented out because it's using the default):

The CrashPlanService, on the other hand, is controlled by a servicePort setting in a different configuration file:

It looks like the MenuBar app was also assuming 4243, so all I had to do was make sure that they all matched up, by editing the my.service.xml file. If you didn't know, you can open a file in its default editor with the open command:

And then restart the CrashPlanService using launchctl:

And then everything has been hunky-dory since!

Hope this helps someone else someday!